Can’t stop, won’t stop: Blackmagic Design today announced the final release of DaVinci Resolve 16.0 and then immediately opened a public beta of Resolve v16.1 with a host of new features.

The company said it was calling time on the release of v16.0 in order to ensure that studios could update to a stable version in time for the new television programming season. At the same time, it introduced a new assortment of features for beta-testing, most of them aimed at making editorial work on the software’s already speedy Cut page even faster.

In a demonstration that was live-streamed this afternoon (check the Blackmagic home page if you want a replay) Blackmagic Design CEO Grant Petty showed off a variety of new features on the Cut page based, more or less, around the sorting of footage so that relevant clips can be automatically retrieved for easy addition to a timeline. For example, editors will now be able to organize media in different folders, and only clips from folders beneath the currently selected level will be visible. Resolve’s Source Tape — an end-to-end assembly of all available clips — will reassemble itself in real time as different levels are selected.

And then there’s the Sync Bin, which Petty described as “like a digital assistant that sorts clips for you.” It sorts through all of your clips and, by analyzing date and timecode, shows you only the ones that are sync’d to the point you’re at on the timeline. It’s a slick way to edit a multicamera shoot, for example. Sync’d clips appear in a stack in the bin, and also appear in a four-view grid in the viewer. The editor need only hit the number key corresponding to a given camera angle and click Source Overwrite to push to that angle for the default shot length — all without bothering to specify an in or out point on the timeline. 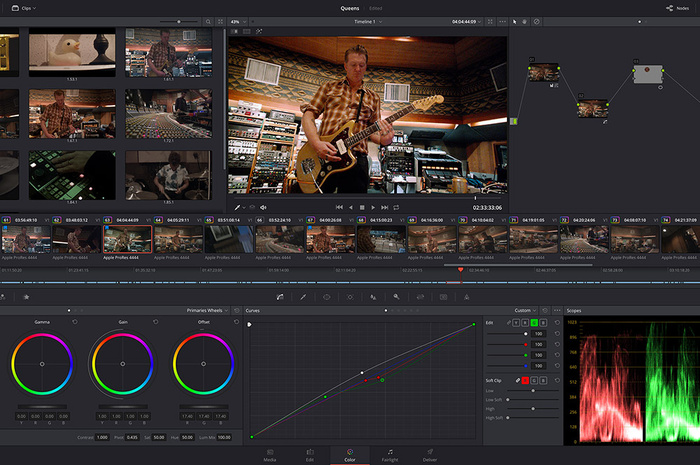 Multicamera editing. The four available clips are all displayed in a stack in the Sync Bin, upper left, as well as in the viewer, upper right.
Blackmagic Design

This works best, of course, if all of your footage has proper timecode. If not, a new Sync Window can be used to sync up shots that were acquired without timecode, either manually or by using audio, and then allow the editor to pick the best shots available for any given moment on the timeline. 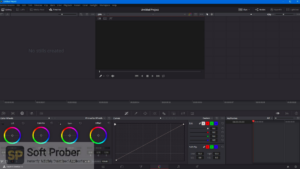 Resolve’s Cut page attempts to guess at what an editor is trying to do based on where the playhead is positioned on the timeline, adding a transition at the closest edit or making an insert edit. The new version adds small visual markers, called Smart Indicators, to show where Resolve anticipates making an edit or placing a transition. These tiny icons update in real time as the editor moves around the timeline, offering an indication of what the software thinks the editor is thinking.

Blackmagic’s Editor Keyboard has gotten some love, too. The search dial now has an Adaptive Scroll feature that automatically slows down to a frame-by-frame jog if you’re trying to dial in an end point. The function keys have been commandeered to serve specific editorial functions. And the dial can be used in conjunction with keys for features including Live Overwrite, which lets user “paint” a clip onto the timeline by holding down the key corresponding to the camera number and twisting the search dial to visually specify the length the clip should run.

If you’re working with high-resolution footage — say, by shooting with the just-announced Blackmagic Pocket Cinema Camera 6K — you may get a lot of mileage from the updated Close-Up feature, which now includes face detection to cut to a zoomed-in “close-up” nicely framing the face of the person you’re shooting.

The cheekiest new feature is something called the Boring Detector, which finds spots on the timeline where shots linger too long without an edit and warns that they are, well, boring. (Fortunately, you get to decide how many seconds is too many seconds.) Similarly, you can specify a minimum number of frames that a cut must run before it’s detected as a “jump cut,” generating another warning. We can see where this feature can absolutely be useful — say you’re editing in a real hurry and you want to make sure you didn’t inadvertently leave a stretch of bland video in your cut — but it’s a little discomfiting to imagine our NLEs talking back to us.

The DaVinci Resolve 16.1 public beta is available for download now at the Blackmagic Design support site.