Football Manager 2021 Touch is the faster way to experience life in charge of the world’s top football clubs.

Since the start of 2020, the face of the world has changed. It has gone through a lot due to pandemic COVID-19. The future of Football Manager 2021 Mobile was also indefinite and there were concerns that the new version of game won’t be released this year.

But the good news for football fans is that Sports Interactive confirmed there WILL be a Football Manager 21 release on November 24th. And if you can’t wait for November, why not update your version of Football Manager 20 with the 2021/22 season update?

They said in an official statement:

‘Despite all the problems going on in the world, there will be new Football Manager Games released later this year’

The official trailer for Football Manager 21 dropped too:

Today we will try to answer the most of your questions about Football Manager 2021 Mobile.

This probably is the most asked question about football manager 2021.

Honcho Mikes Jacobson, the head of Sports Interactive, stated in an official statement that the release of the game will be delayed this year as the team is working from home, which led many fans to believe there would be a Christmas release of Football Manager 21.

However, in a surprise announcement, Sports Interactive confirmed the game will be released on time on November 24th on PC/Mac, so it should be around the same time for the Football manager 2021 Mobile release date.

As beta-version always arrives two or three weeks before the actual game release so you’ll be able to grab a copy on the November 12. In past games like FM 20, the beta versions were released in the month of October but this year it will come out a bit later than usual. 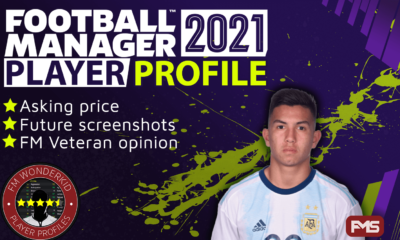 Fans will be able to get early access to the game through the beta version. The beta version will include limited features from the original game which will let fans test the game. The reviews of users on beta version will hold great significance, as based on these reviews, the development team will make the final changes.

There is no doubt that FM 2020 was a gem of a game and it included almost every feature one could demand in a management game. But fans still have several features on their wishlist. Sports Interactive publishes a press release every year discussing new features in the game. This press release will probably be published early September. But till then let’s discuss some of the features fans have on their wishlist and hope the company will add them in the upcoming game.

Many clubs like Liverpool and Ajax use throw in coaches. And we would love to have this feature in the new release. This will increase the roles you can play in the game.

The split formation is a feature that is highly demanded by fans. Split formation means that there should be different formations available for when in the possession and when not in possession. This will improve the realism of the game.

Game should allow us to create a player with completely customizable tactics. Preset player roles are available but they do not allow to create players without instructions. This feature must be added to the game so gamers can create players with the tactics they like.

I bet that no one of us thought that one day Jamie Vardy would be crowned as the Premier League’s top scorer. But he proved us wrong and played his way to the top of the table and defied all the odds. This is a feature that should not be overlooked this time. The performance should be made variable so that any player can make his way to the top.

The graphics engine has always been a problem with the franchise. The graphics should be updated and improved in the Football Manager 2021 Mobile game. The improvement of graphics will add to the fun of the game and will provide players an ever-lasting experience.

The game has different versions and the price is different for each version as I have already told above. For example, FM 2020 had a scaled-down version for tablets known as FM 2020 touch. Its price was only £20 and it is expected that FM 2021 touch price will also be the same.

Football Manager 2021 Mobile will be the cheapest way to play the game, and will probably cost less than £10.

You should forget Juventus’s license because they have already made a three year deal with Pro Evolution Soccer. The biggest con of non-licensed games is that the characters don’t have the likenesses of the actual footballers. These likenesses include names, faces, logos, jerseys and etc. So this is a factor that has great importance, and Sports Interactive should pay head on it if they want to keep the gamers glued to the screen.

We discussed Football Manager 2021 Mobile. We discussed factors like new features in the new version, the game’s price, and the fan’s wishlist. Let’s hope we get the best from Sports Interactive and will also get all the features we want in the upcoming release. And let’s also hope that we will get all of this at a reasonable price.

Run meme pages and this website. But spend far too much time on Football Manager to do either very well.